Today thanks to the internet a lot of information is available. You are able to read a lot on the internet while you are also able to download software. In 1982 the Commodore 64 was available to the public. I can remember me as the day of yesterday when I got my first homecomputer, the Commodore 64, as present for Sinterklaas, which is a Dutch holiday kids get presents. 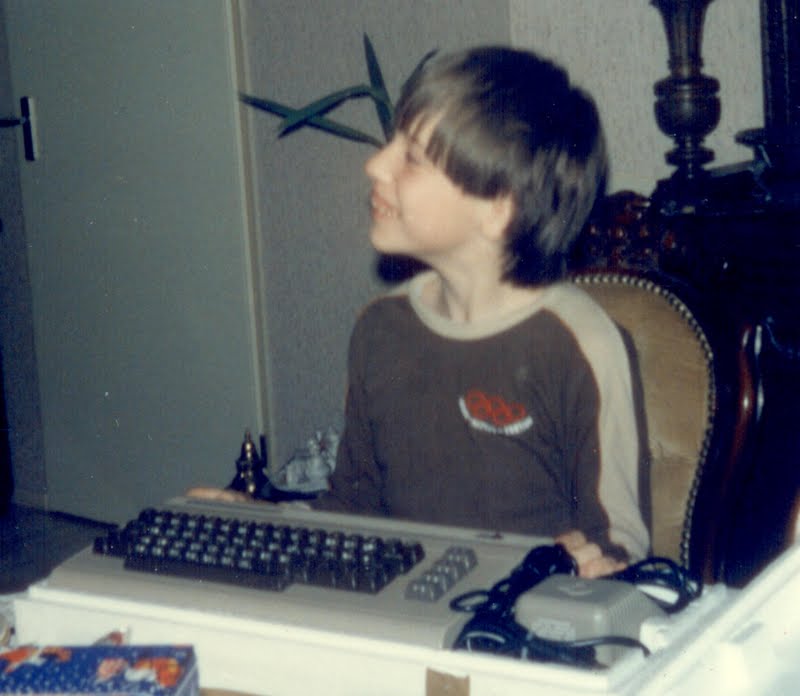 I was very happy with the present. In the beginning you had no place to buy software and all information there was could be found in your manual. You had to program your own program in BASIC. Later magazines came out with information about software and new developments.

Before there were Dutch magazines we only had German and English magazine for sale in shops. In  Maastricht I always went to buy them at Ton Rouwenhorst located in the Frankenstraat and Purnot in the Stationsstraat.

Zzap!64 had a cartoony and modern look compared to the other magazines. Especially the tips and tricks were done very well. In those time we had no YouTube or Twitch. You had a playthru on paper with screenshots for every step. Under the screenshots was explained which keystrokes or joystick moves you had to do to finish that level. Amazing how they manage to explain this in static form. With phantasy and lot’s of trying the readers were able to do this. Nowadays on Youtube and Twitch you can see how gamers complete a game, put it on pause etc…

It’s difficult to imagine but every month a new magazine came out and till that time you weren’t aware of any news. Every month was a happening for gaining new information. The news at that time didn’t report anything on the newspaper or TV. Computers were only for nerds. No mainstream at all.

The Commodore 64 has a special place in my retro heart because it’s my first homecomputer. It is also a computer which you had to find out and experiment all by yourself. Nothing works plug and play. Even loading a program you had to learn by reading the manual or like some others did by learning from other users. When I was in elementary/primary school in our class there were only three having a homecomputer. Funny fact is that we all had the different one infamous of the eighties, Atari 600/800XL, ZX-81 Spectrum and the Commodore 64.

Loading and saving of data and programmas was done via a datasette. This is a custom made cassetterecorder which was able to use data in stead of audio. 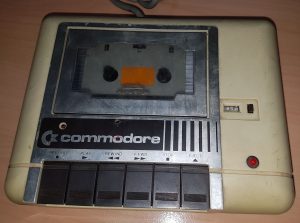 Actually it worked pretty well. The only thing that was not so nice was the speed. The loading process of a program took ages. A session of loading a game took 15-20 minutes. At those times you had to have patience. It was not click and ready. That is not all. Later it appeared that the cassettes could not simply be exchanged. You had to equalize the heads. What an era. Now everything works automatically and well. If you look at all the processes that have to be completed from the start of loading to starting a program, current users have no real reason to complain. It is all controlled quickly and easily by the operating system.

ZZap! 64 also included demo cassettes that were stuck to the cover. A huge distribution challenge. 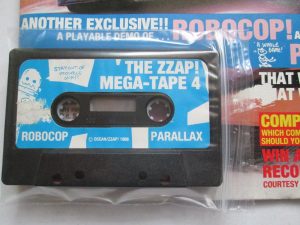 On these demo cassettes you could try the program to later purchase the full version.

I enjoyed ZZap for a huge amount of time! The Commodore 64 has long held out as a system. From December 1983 to February 1988, the C64 did its daily computer tasks for me to be replaced by the Amiga 2000. I can remember that the C64 has been working alongside the Amiga for a few months because not all programs of the 64 were available for the Amiga, but this came quickly corrected by publishers. The 8 bit time was over.

The Commodore 64 has made such an impression on me as a 9 year old boy that I was fascinated by the possibilities of computers. Both on a professional way and as an entertainment device. The 80s were the rise of the video recorder. The betamax, VHS and Video 2000 (VCS) were on the rise in the living rooms. Unbelievable device where you could record TV and let them play whenever you wanted it. You could even pause the screen to a still image. Some saw it as magic. The home computers of that time went a step further. Today we connect a computer to a special monitor to get the maximum quality out of it but the first home computers were made so that they could be connected to the TV so that a purchase of a (often monochrome) monitor was not necessary. The Atari 600 / 800XL and Commodore 64 (preceded by the VIC-20) were good at displaying colors on the TV.

The music that came from the C64 reminded me very much of Jean-Michel Jarre’s oeuvre. SID music is still very popular with DJs today.

I can still remember that I had programmed a card tray in BASIC. I had put in the names, addresses and phone numbers of the family. Because of this I was able to search on whatever. My father thought it was very interesting. The computers at his office were indeed more powerful but were only able to display the image in monochrome. The Commodore 64 cost a fraction of such an IBM PC. Storing and loading via tape was really slow. I got a real disk drive for my birthday in 1984, the Commodore 1541. What a relief this was compared to the tape. Instead of having to work sequentially, you could now address various programs and data on the disk.

My father and mother stimulated my hobby and I am still grateful to them for that. From the Commodore 64 I went to the Amiga 2000. The Amiga 2000 was really a multimedia powerhouse. I have done a lot of video editing with this. The nicest assignment was making an intro and end credits for a video production company. I myself was not 18 but it was 18+ films. The titles of the films were explicitly clear. As a 14 year old boy, this was funny. My Amiga 2000 had 9 MB of memory and an A2301 Genlock and a NewTek DigiView. This allowed me to make NOS / NOB-like effects. I found out through this company that NOS used the same configuration as I had then.

From the Amiga I went to the PC. Commodore had made some strange decisions in the eyes of the consumer. They kept sticking to certain things like SCSI and their own HDDs while the PC market became more and more open. The purchase of peripherals was becoming more and more expensive compared to the PC alternatives. Networks were emerging. I was doubting to buy an Amiga 2500. There were rumors that there would be a Unix version, the Amiga 2500 UX. There was a lot of confusion about it and when it turned out that it was a port, I finally said no to myself. You did not know how long and how well this was going to be supported. Especially the compatibility was a concern. At my father’s office they went to Unix mini computers and data center towards the PC with a local network. Back then, this was the future. Dumb terminals with a connection to a server on a local network. Novell Netware was lord here. The standards and protocols were not yet clear with the Amigas, whereas with the PC this was stable. I then opted for an Intel 80386-DX IBM compatible PC. Due to the knowledge of the PC and the availability of cheaper computers due to the arrival of clones (B and C brands), it was suddenly possible to replace the stupid terminals with PCs that could do a lot of tasks locally and their storage and printer tasks still via the server. My first project was hacking a password from a Novell server at a bank where the system administrator had resigned and changed password.

Thank you Mom and Dad for your stimulation of my hobby.

I have learned a lot during that time of computers, but even today you encounter a lot of issues that can be solved with the knowledge of that time. The basis was then laid.

For more information about my retro devices: