Time flies when your having fun. I’m using now the Samsung Galaxy SIII with Android 4.0 for a week. I promoted the iPhone4 (and iPad) a lot and even created an app for it, a BMI calculator.

I’m going to mention the features and curiosities which I experienced in the first week of the SGS3 (Android 4.0) compared to what I was used to with the iPhone4 (iOS 5.1.1.)

S Voice is Samsungs answer to Siri of Apple. The iPhone4 has no official support to run Siri but I was able to run it due it was jailbroken. Siri was working great while S Voice was running not that well…. a lot of tests resulted in faulty results while Siri gave a good percentage of success, almost perfect. The reaction of S Voice was really slow. I also noticed Samsung added their Google Adsense Publisher code in the SERPs…

The screen is really sharp on the SGS3. Nothing to complain you would suggest. I have a minor thing to nag about. Both phones, the SGS3 and the iPhone4, are now depending of swiping. I found the SGS3 swipping a little bit more harder to do than on the iPhone4. On the SGS3 it feels like you are scrubbing your fingers on bad paper/rubber while the iPhone4 feels smooth and fast. Don’t get me wrong. Both work well but the SGS3 feels a bit less than the iPhone4.

Last week Dropbox released a new app for iOS (Apple) which also supported now CameraUploads. The integration of Dropbox in Android offers more features than in iOS. The bonus on the SGS3 is that Samsung offers you a dropbox upgrade for free of 50GB (free for 2 years). I have to admit that synchronising between multiple devices worked like a charm.

Lately almost all apps are released for iOS (Apple App Store) and Android (Google’s Play). A lot of Dutch Apps are on both platforms available. This is were both platforms are different than Nokia and Blackberry. There is a difference between both platforms. Android offers networktools which Apple doesn’t allow in their app store. A lot of apps of Android can share information between eachother while Apple doesn’t allow this kind of integration in iOS. The feature I really liked was the posibility to install apps via Google Play with your browser and sending the app to download and install on your Android device. This kind of pushing an app to your phone was really a nice option to use and test multiple apps.

Just when I had the SGS3 I was amazed by Chrome on Android. The ability to synchronise and the speed was a good surprise. This works really good on the SGS3. Since some days Chrome is also available for the iPhone/iPad. I played with both. Nice is the option to synchronise. Sadly due to Apples restrictions the Webkit extensions of iOS not really fast. Some sites were loading slower than Safari. The user conveniency is really a plus for the iPhone/iPad compared to Safari. Android is running Chrome faster and more flexible because of it’s Google’s heritage.

In the Netherlands we use still teletext services. This one is the Dutch public broadcast service of teletext on your smartphone. A simple and easy to use app but very popular. The funny thing is that the iOS version is really nice to use and to choose pages with touchscreen while the Android is really bad app. I suppose they will solve this in future releases. The user experience is really bad on the Android version. Pity.

I’ve worked for a week with the SGS3 and I have to say that the iPhone4 (and iPad) with iOS 5.1.1. much better scores on being user-friendly. Everything works always with the same speed. I saw on the SGS3 slowdown on moments I couldn’t explain it, like going to the mainmenu. Strange for a smartphone with 1 GB of RAM and 4 CPU cores. In that perspective isn’t the iPhone4 with 1 CPU core not bad at all or do I have to say really good..

Battery life can be explained in 1 word : disappointing. Was I able with the iPhone4 to do a lot of things per day on 1 battery charge cycle. Most of the times I managed to look for my charger on the very end of the day. 1 time it happened I went out on 06.00am and didn’t make it in time for the charger. The SGS3 is really a battery eating machine. Even on energy saving mode I don’t get it to the evening. Perhaps I can tweak this but the iPhone shows that in essention it’s better balanced for normal users their battery expectations that the SGS3 does.

With the release of iOS 5 Apple had suddenly a nice feature. Directly from the lockscreen users were able to call the camera app without entered a code. 1 simple swipe and you opened your camera app. Really handy. I miss this feature on Android. Because of security policies on the Exchange-server I’m mandatory to use a good password. In Android this is annoying if you want to make a photo. I tried it several times and the fasted I had my camera app on the SGS3 opened was in 5.6 seconds and slowest in 7.4 seconds. On the iPhone4 this is in… 1 swipe… ready… Is a major difference in time and actions. Also a nice feature on the iPhone is that you can control your musicplayer via the lockscreen without the need of entering your codes, which is not possible with SGS3 with android out of the box.

Which phone do I finally choose? I will go for the Samsung Galaxy SIII. This phone is new. Technical specifications are really good. The apps are coming but also the tweaks. Apple fooled me too long (front/back camera specs). Never an iPhone for me? No, that’s not what I said. 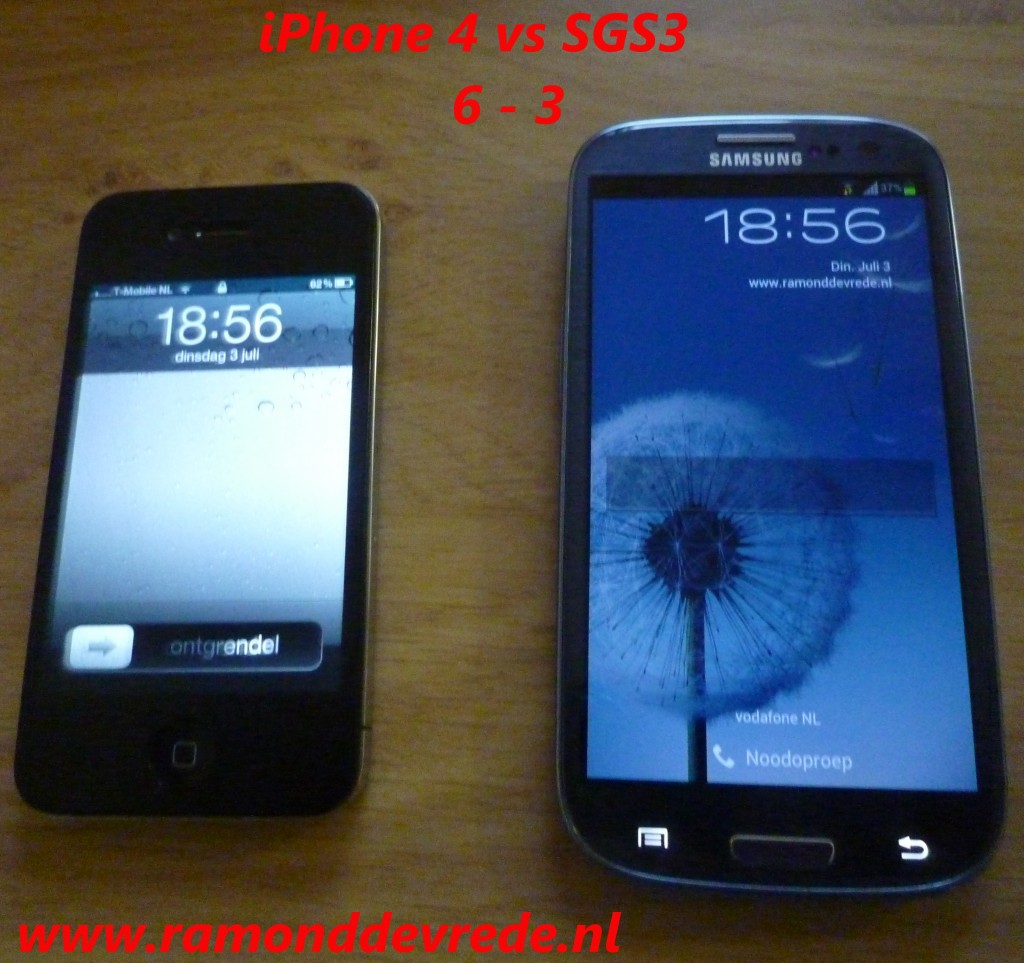